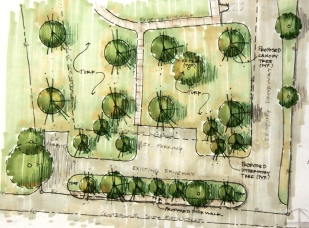 I. Call to order

Glenn Philips called the meeting to order at 7.34 pm.

Tim Fulmer of C. Robert Wynn Associates (the Township engineers) reviewed the status of revisions (minor) to the current (1999) BT Flood Plain Ordinance as required by FEMA. The new version, copies of which were available at the meeting, must be approved by the Supervisors and reviewed by FEMA before March 16, 2015 in order to maintain FEMA flood insurance coverage for the township. Most of the revisions involve ensuring internal consistency of terms and definitions between the revised ordinance and other existing zoning ordinances and that all such terms are as used by FEMA.

Tim discussed the ‘appeals process’ under the new ordinance in Section 8.02. Appeals go through the BT Zoning Hearing Board. But what is allowed or not is constrained by FEMA regulations. New FEMA floodplain maps will be publically available before March 15, 2015. Mr Fulmer stated that, based on his preview of these maps, the floodplain boundaries were generally better defined and

more consistent with actual flood history but that little had changed in Bridgeton.

Terry Brown said that while he was the zoning officer he had developed a checklist of issues concerning the FEMA regulations pertinent to construction permits that was helpful to homeowners. Tim Fulmer said that he would contact the Zoning Officer, Dan Jenkins, to see whether this checklist was on file and whether it needed updating.

CC Hopf moved, with Roger Keller seconding, that the existing officers be re-elected for 2015. The motion, being agreeable to all, was passed unanimously.

CC Hopf moved, seconded by Terry Brown that the existing schedule of meetings be retained for

2015; namely the 4th Wednesday of each month Jan-Oct and a combined Nov/Dec meeting on the first Wednesday of December. The motion passed unanimously.

Mike Doyle recapped an earlier discussion that a critical problem with the existing ordinance concerning noise (Section 508 of the Zoning Ordinance) was that there was no enforcement capability. A solution would be to appoint an enforcement officer. This could be any existing officer so designated.

Terry Brown questioned whether this was necessary since a ‘stand-alone’ noise ordinance, to which all Commission members are in agreement on the prior recommendation of the Township Solicitor, should make it possible for residents with a noise complaint to access the District Magistrate directly.

Terry moved that the existing Section 508 (‘noise’) in the Zoning Ordinance, as is, be put into a stand-alone format and forwarded to the Supervisors for approval. There was no second for this motion.

Mike Doyle pointed out that the existing noise ordinance contains prohibitions solely in terms of objective criteria, i.e. the quantitative sound level (in dBA) with several exemptions based on specified noise sources (e.g. power tools during daytime hours). It does not cover situations involving

‘nuisance’ noise such as barking dogs where peak sound levels may be below prohibited dBA levels yet constitute a nuisance by their repetitive nature. These situations would require subjective evaluations by a third party (i.e. an official).

Roger Keller moved that the Commission request: 1) guidance from the Township Solicitor as to the exact procedures of how a complaint of a stand alone noise ordinance would be filed, how it would be investigated and evaluated, and ultimately how it might be eventually brought before the District Magistrate for enforcement. 2) guidance from the Township Solicitor concerning restrictions on

‘nuisance’ noise sources based on frequency, duration, and hours of the noise. This motion was seconded by C.C Hopf and approved with one abstention.

Terry Kuntz of the Bridgeton Township Sportmen’s Association gave a written statement of the goals and objectives of their organization with details of the good value it provided the community in ecology and outdoor preservation. He gave a verbal description of ways the club has served as a

good neighbor by mitigating potential noise disturbance through plantings and earthworks. He stated

that their property is surrounded mostly by State Gamelands and an EPA superfund site. He offered his organization’s assistance to cooperate with the BTPC in development of the revised Noise Ordinance if needed.

Upon a motion by the Chairman, seconded by Roger Keller, and approved unanimously, the meeting was adjourned at 8.55 pm.